It has been a long day and I’m exhausted. Like many of you I had a hard time sleeping last night and then had to make the drive to Indy. We left with plenty of time but the boys forgot their coats. If it rained we might need them so we turned around. It only added 15 minutes to the trip but it was still frustrating. Then began the traffic. We were crawling. In two hours we were still only 75 miles from home. Would this drive never end? With stops also added in our trip took longer than planned and we barely made it for qualifying. It also didn’t help that no one could direct us as to where we pick up FanVision. Once we did find it we had been hearing the cars on track and I was ready to watch so we choose the closest spot we could. We were actually right behind Saavedra’s pit box. And then the rain came.

We were prepared for the rain and the boys actually enjoyed hiding under their ponchos and watching the action on FanVision. I was wondering why we continued to sit in the rain but we stayed. I looked across the track and saw so many under the cover of the second row of bleachers but getting there would take more effort than just hunkering down where we were. I’m glad we did because as quickly as the rain began it stopped and we were enjoying the sunshine.
Then the unexpected happened. Just when you were thinking Ryan Hunter-Reay would be on the pole he crashed. That ended qualifying and Sebastian Saavedra won the pole position. Wow, I did not expect that.
After qualifying I wanted to explore seating possibilities for tomorrow. I wanted to venture over to the mounds in turn 2 (road course) but when I gave into the boys pleadings to take the offered bicycle ride and mentioned turn 2, we ended up in turn 2 of the oval. Duh! I should have been more clear. It worked out fine- if I had the time I would’ve ventured to all the viewing options to check them out. The boys and I enjoyed sitting in the sun and with a video screen right there it worked out ok. We had a view of cars coming through turns 7,8,9 and 10 (although at a distance) before they drove past us and when we were ready to leave it was just a short walk to where I like to park. I don’t think we will get to the track to early tomorrow and am guessing the GA seats will be pretty packed. If we have a place to sit I will be happy so we might be right back at turn 2. I love IMS but when you are trying to get around with two boys in tow (and sometimes complaining) the grounds seem overwhelming. We might just stick with what we know and not try to navigate through the crowds tomorrow.
With the skies turning dark again and boys getting tired we decided to leave before it rained again. I had wanted to watch the celebrity dunk tank on Main Street at the Indy Family Foundation Fest but the boys wanted to swim. I gave in and we headed to the hotel. Had a quick dinner and then swam. We are exhausted but are having a great time. 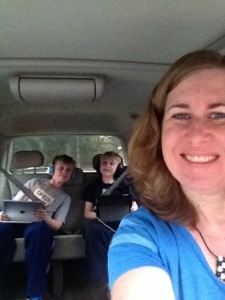 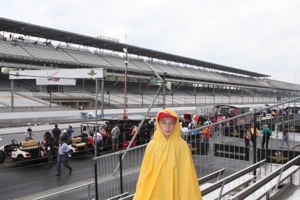 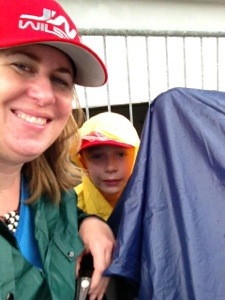