When the boys and I left Indy after the GP of Indy I was bummed that we wouldn’t be returning. We are usually there for time trials but switched things up this year and even though we had a fantastic time it was depressing knowing we wouldn’t be back this May. Then I got an email that made me smile. It said that Ed Carpenter and Townsend Bell would be at the Milwaukee Mile on May 20th and you could walk the track with them. I immediately called my friend, Kristen, and made plans to attend. I considered taking the boys out of school to join me but they already missed a day to attend the GP of Indy so I decided against it. Then in the meantime plans changed and James Hinchcliffe would be there instead of Townsend Bell.
Kristen and I followed our usual race weekend schedule which involves a pedicure. Kristen is not a huge fan so a pedicure on the schedule helps make the day more fun for her–I enjoy it too! Then we headed to the mile. Of course the media was there doing their thing but I got to meet Tony DiZinno so that was cool. I love meeting the people I follow on Twitter. When they wrapped things up we had a chance to get autographs and pictures before the track walk. Ed was great and I got an autograph and a picture with him. I had a bottle of Fuzzy’s vodka that I hoped to have him sign but I didn’t want it on the walk so I left it in the car. Before I got a chance to meet James Hinchcliffe the track tour began. Ed and Hinch sat in the back of a minivan and everyone else followed along as they answered questions about the track. It was fun and great to hear their perspective. Do you ever break in turn two- James answered, -Only if something is wrong or to avoid something that went wrong in front of you. Some tire marks were on the wall and jokes were made about who they belonged to. As we walked around I eventually faded to the back of the crowd because as much as I wanted to hear the conversation I also wanted to enjoy being on the track and take it all in. It’s a track with so much history and I wanted a time to reflect on that while there. I took a couple pictures and made my way back up to the group. When we reached the start/finish line the car stopped and Ed and Hinch answered some more questions. We were then told that Ed needed to leave but Hinch could stay and answer more questions. Before Ed left I wanted him to sign my Fuzzy’s vodka. Kristen, dear friend that she is, ran to the car to get the bottle and when I asked Ed to sign it he remembered I had mentioned it earlier. I love that he took the time (when he needed to be leaving) to sign a second thing for me.
Kristen and I returned to listen to Hinch. The Q &A went on for awhile and the time was getting late. I needed to get home to meet the boys after school. I hated to interrupt the questions for an autograph but I had made a collage print of pictures of Ed and James and really didn’t want to leave till I had it signed by both. I took advantage of a half second lull in questions and said, “James, I’m so sorry but I have to go get my boys off the bus and I would really love an autograph.” I explained that I had this collage made with pictures of him and Ed from last year at the mile. He took the picture and signed it and pointed out that he was in front of Ed on the track. Kristen reminded me to tell him about Zach’s crab so I told him how my son named his hermit crab James Pinchcliffe. James looked right at me and said with all sincerity, “Tell him I said Hello.” It was such a simple thing but I truly felt that he cared about his fans and about a young kid named Zach. I thanked him, wished him luck in the 500 and shook his hand. Then Kristen and I made our way back to the car.
As we walked back it was Kristen who mentioned how incredible it was that we just met two of the 33 people that will be racing in the Indianapolis 500. James had mentioned it during the Q&A that most sports have many athletes but even in the biggest race of the year only 33 will be racing. Kristen said that it is such a small group but that it is amazing how approachable they are and how personable. This was the first time she met any drivers but she was quite impressed. I think we might be making a greater effort to make the autograph session at Milwaukee this year.
She pointed out something I already knew- that the Indycar drivers are awesome. Their willingness to meet fans, sign autographs, answer tweets etc has always been a priority for them. Kristen talked about her son wanting to join twitter so he could follow some Major League Baseball players and she was reluctant because she didn’t know if the content would be appropriate. My boys are not on twitter but if they followed the Indycar drivers I wouldn’t worry a bit. They are all so family friendly and make an effort to stay that way. I’m very grateful for that.
As we left the track you actually cross over the track well I pulled out just enough to look like I was racing down the back stretch in my minivan. We grabbed a couple pictures and then made our way home. What a fun day. 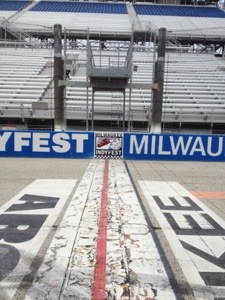