George Phillips recently wrote a Blog Post and graciously mentioned my sleepy little blog. That was just the kick I needed to get me to my iPad to catch up on a couple posts I’ve been wanting to write. One of the benefits of being a blogger is there are no deadlines to get articles out. That same benefit can also be a drawback as it makes it easy to push things off until tomorrow. I enjoy blogging and I especially enjoy sharing thoughts with the friends I’ve made through Twitter and IKissed The Bricks so hopefully I won’t be too much of a procrastinator in the future.

Iowa- I had the pleasure of attending the Iowa race with two girlfriends. My long time friend, Kristen, hasn’t attended a race since the 2014 Milwaukee race. We were glad we could finally find a race weekend that worked for us.  Kristen is not a big IndyCar fan but does enjoy attending the races. We met up with my Twitter friend, Lisa, and had a wonderful time at the race.

Kristen and I arrived at Iowa Speedway shortly before qualifying on Saturday afternoon. We bought tickets for qualifying at the gate because they charged a service fee online- well they charged the same service fee at the gate so that was disappointing. I really don’t understand, just say the tickets cost $20. Kinda frustrating. Then we learned that the Fan Walk is not included in the ticket price and that would be an additional $10. It was actually quite confusing. An entrance ticket is needed to access the Fan Walk- we had that. You can access the Fan Walk for free before the stands open but once the stands open you need an additional band to access the Fan Walk. So while it sounds like the Fan Walk is open to anyone with a ticket it actually isn’t with the exception of those who arrive before the stands open. From what we could see the Fan Walk just allowed you to walk a small portion of the infield behind the pit wall. We just didn’t feel it was worth the extra money. There was an additional charge for a Paddock pass. I do believe if you spent the $30 for the Paddock pass you could also access the Fan Walk. Oh well surely we can find plenty to occupy our time. Well not really. Saturday afternoon had only a few booths set up. We went to the Firestone tent thinking we would be silly and get an airbrush tattoo but on Saturday they only offered rub on tattoos. Very little to see or do in the tents. Qualifying was fun though. It was a warm day but we caught up with Mike Silver and watch qualifying. It was actually quite exciting as each car bumped the last one off the pole. Many were surprising but as Will Power was one of the last to go out it ended up not being a big surprise in the end. Will Power won the pole position and I frowned saying I’ve seen this race before. Seems Power has a way of winning the pole at many of the races I attend. Oh well fingers crossed we will see someone other than the pole winner win the race on Sunday.

Kristen and I got a fantastic deal on our hotel, unfortunately it was nearly an hour from the track. We headed to our hotel and met up with Lisa for dinner. We enjoyed a fantastic BBQ meal at Wobbly Boots and enjoyed a fun girls night out. When we returned to the hotel the pool was overrun with a baseball team so we skipped the pool. 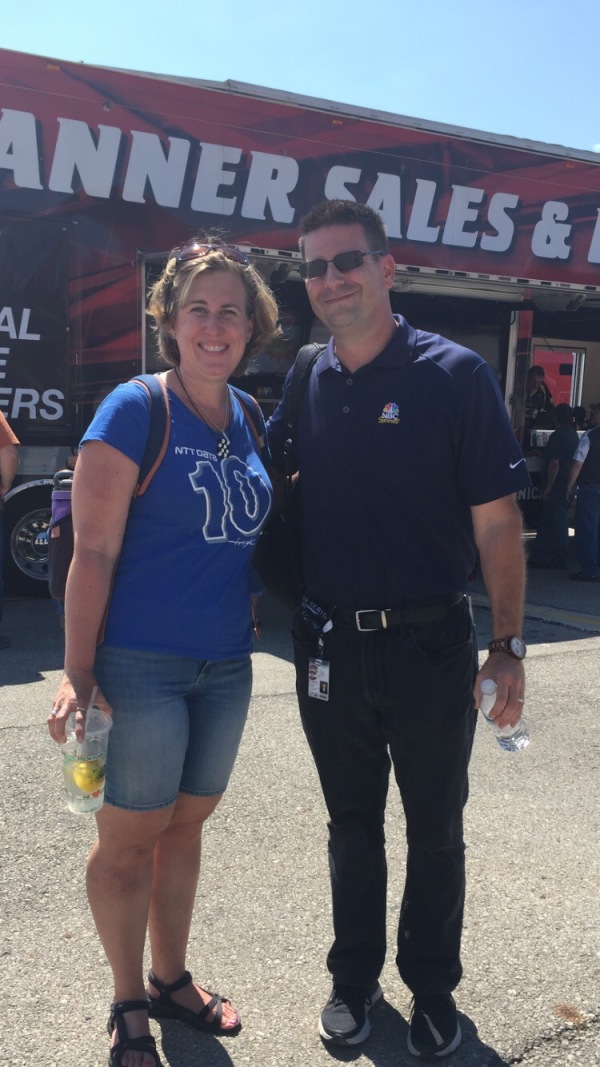 Race Day- Arrived at the track at noon. We met Lisa and thankfully had more options and tents to visit on race day. We planned to enjoy an ear of corn but the complimentary corn was gone in less than ten minutes. Another disappointment- it’s called the Iowa Corn 300. Chevy was providing free corn from noon- two o clock and they were out of corn in less than ten minutes- they didn’t plan that one well. Firestone was also out of some of their freebies. They did have the airbrush tattoos though. We didn’t want to wait in line though so we passed. We bought some souvenirs, watched the Lights race, enjoyed a beer with Mike and eventually made it to our seats for the race. The crowd was okay but I know the crowds were much bigger when the race was a Saturday night race. We would have preferred that too.

I still haven’t watched the tv broadcast of the race and it was especially hard to follow on such a small track. The leaders flew by and were mixed into traffic.  So rather than go through the whole race I will touch on the two things that stuck out to me. The red flag and Helio winning.

Red Flag– It was so hot in the stands and I kept an eye on the sky hoping for a stray cloud to block the sun. Even before the clouds rolled in we felt a couple rain drops. Nothing significant and I was honestly surprised when they threw the yellow flag. I couldn’t imagine there was enough moisture to warrant a yellow. However, as they continued running under yellow and laps were ticking away as clouds built I wondered how his would play out. The radar looked like we could get a significant amount of rain but before it made it to the track it dissapaited. So did we need the red?  No not for safety I don’t believe we did. However, it was the wise decision because way too many laps would have been run under yellow had the red flag not been thrown. I rather the cars stop and wait to then they can really race once the threat has passed. I support the decision for the red flag. It might not have shown well on TV but from where I was sitting and watching the radar I think it was the right decision and once the threat passed we went right back to racing.

Helio wins- In all the races I’ve attended I only saw Helio win once at Chicagoland. Kristen and I left that race believing Scott Dixon won and didn’t learn until we watched the news at night that Helio had actuwon so we missed seeing him climb the fence. There has been a lot of talk recently that Helio might be racing sports cars next year and no longer participating in I dyCar full time. I’m so grateful we were able to see him climb the fence. I’m also thankful that if this is his last year he was able to get another win before leaving. All that said, Helio is second in points, a race winner and pole winner- he needs to be in IndyCar again next year.

We lingered in the stands and watched the victory celebration before saying goodbye to Lisa and driving to the hotel. Kristen and I enjoyed a delicious Mexican meal and finally got to swim in the pool. Helio was Kristen’s pick to win the race so she won the bragging rights and hopefully will continue to attend more races in the future. She doesn’t always understand my passion for IndyCar but I will discuss that more in my next post. 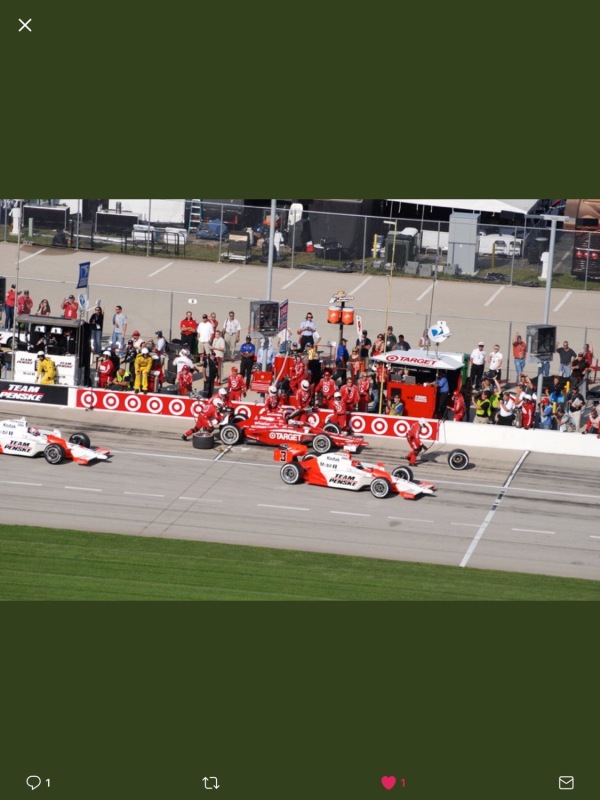